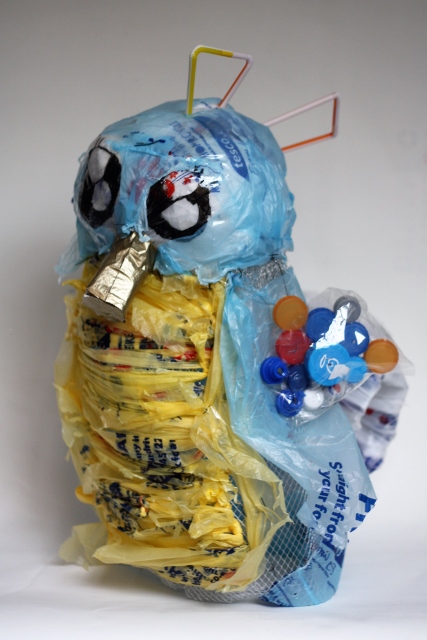 The reason why we have chosen a seahorse is that we saw a picture of one in the sea clinging onto plastic earbuds. We felt sorry for this precious animal having to live surrounded by this awful product, known as plastic, and we felt we had to do something about it. The reason behind this name (Choked) is simply that when the marine animal swallows it, it cannot be digested and will eventually kill the animal. Sometimes the plastic pieces are too large and the animal may try to swallow it, but will choke on it instead.

Our sculpture is approximately 69cm tall and 35cm wide. The materials that we have used for this sculpture are: plastic bags; bubble wrap; plastic bowl; wire mesh; crafting wire; bottle lids, straws; cake box; a bottle and tape. This sculpture required having to bend and mould the wire mesh and after all that, it became a frame for it. We had to carefully tie plastic bags to the body (we had some help with the crafting wire) it was incredibly difficult because there were only tiny holes in the wire mesh. At the start, the body was far too big for the head so we had to carry on putting layers on the head to make it look bigger! The first design of the eyes was a black tub lid and two white bottle lids but they were too difficult to attach so instead we drew it on with a black pen.

We hope we have inspired you by telling you about plastic pollution, so we hope you are more aware of how it is affecting the ocean and other animals.